This is the second in a series of blog posts, published each Monday until the release of Certain Dark Things. I’ll be discussing Mexican films, the barrios of Mexico City, and the folklore which inspired the novel.

Certain Dark Things is dedicated to Germán Robles. This actor, best known for his role in the Mexican movie El Vampiro, is mentioned in the book and also appears in a couple of other short stories of mine (“Stories With Happy Endings,” found in my collection This Strange Way of Dying).

Robles was born in Asturias and migrated to Mexico after the Spanish Civil War, where he became an actor and performed in movies throughout the 50s and 60s, before developing a long career as voice talent for dubbings of American TV shows, with occasional roles on soaps. Robles was never a huge movie icon, like Silvia Pinal or Pedro Infante. He made his movie debut a bit too late. By 1957 the end of the golden age of Mexican cinema was not there yet, but the expiry date would arrive soon enough. A few years earlier, Robles might have had a chance to play the same prestige roles Arturo de Córdova got. But Robles lucked out, anyway, when he played the titular vampire in El Vampiro and its sequel El Ataúd del Vampiro. They guaranteed him a slow-burn sort of cult status and he seems to have had steady work all his life, so it wasn’t such a terrible fate.

I saw Robles in El Vampiro, of course. As a child I spent a lot of time watching black and white Mexican movies. Everything from comedies to noirs showed up on Canal 2 and I’d marathon through four or five flicks on a weekend. I also watched Hammer films and Universal classic monsters. My great-grandmother would sometimes sit with me, knitting. My great-grandmother was illiterate and she couldn’t read the subtitles, so she stuck to the melodies of Agustín Lara and the adventures of Cantinflas, but she did like American monster movies because they were easy to understand. Giant Tarantula menaces desert town is not hard to comprehend.

I liked Christopher Lee and Peter Cushing and Vincent Price, but I loved Robles. Not like a sexual icon, not like girls seem to love Edward from Twilight. I never wanted to get together with this vampire, I just loved his black and white world of fake cobwebs and chandeliers.

My high school friends say that when I was a teenager, I’d tell them I was going to become a vampire. I don’t remember it, but I believe it. I was enough of a weirdo. Blasted Bauhaus, carried Truman Capote under my arm, tried to teach myself French because I’d read Madame Bovary, made cute mix tapes and stupid drawings while also reading about the killings of Jack the Ripper and marveling at the crime rags on the newsstands, all the kinds of things which might make you cool at 24, but at 15 they just make you slightly mad and off-putting.

They probably were wrong, though. More likely I wanted to be Robles. Which is different than a vampire. 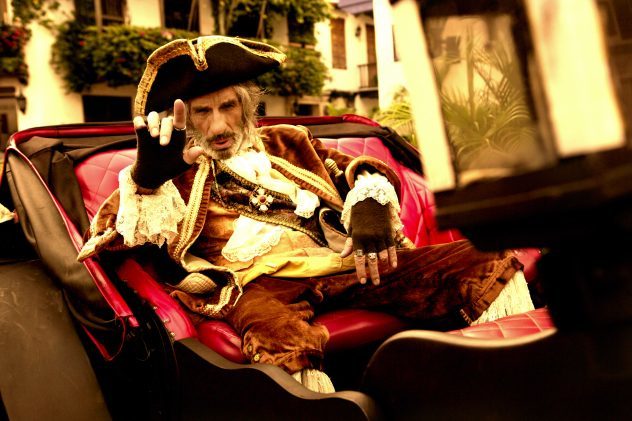 When I was a teen, Robles opened a theatre play called La Dama de Negro. The show ran for many years. I only saw it once. I think it might have been opening night. Robles was old by then. He was born in 1929 and it was 1994, and he’d long gained wrinkles, lost the black of his hair. My mother either knew somebody or bullied her way backstage so I could hold up my program in Robles’s face and shake his hands and not say a single fucking word. Which makes perfect sense. Even though I was a social idiot, I was smart enough to realize blurting I LOVE YOU to an old actor was idiotic. Especially when its likely to be misinterpreted. Like I said, I didn’t romantically love Robles, I loved the oh-so-fake-looking sets of his movies, the shadows and the shots of him staring disdainfully at the camera.

My husband (before he was my husband) used to live near a cafe where Robles often had supper with his friends. I could have, I suppose, waited for him there, but that just seems stalkery. And I didn’t want to do it, anyway, because there’s a difference between the performer and the character they give flesh to. I understood the separation. No sense in trying to ask Robles to repeat lines that played on the TV set.

But the distance of the years did not diminish my vague interest in Robles. He popped up in several stories and when I was writing Certain Dark Things, I wrote Bernardino to stand in for Robles. I dedicated the book to him after asking my husband if that seemed like too much of a fangirl thing. My thought process was that I’d write “To Robles, the vampire,” and when the book was out I’d mail him a copy. Maybe he wouldn’t be able to read it (I didn’t know if he spoke English), or maybe he wouldn’t care.

“He’s 80-something,” I told my husband. “I should finish the book quick, what if he dies?”

And then, of course, he did die. At the end of 2015. Ninón Sevilla also passed away a couple of months later, which seemed like a strange kind of double death (the two actors I’d loved).

Well, people die all the time, I told myself. And Robles was sickly, had been sick for a while. So I tried not to let it mean so much.

By random chance Netflix was showing one of Robles’s vampire movies around that time. I sat back, thought what the hell, and pushed play. I lasted only through a few minutes of it before I started crying. Probably because he represented one of the last bits of my youth. It’s not nostalgia, it’s a bit different. It’s kind of nodding and admitting it’s gone. You don’t pretend your life is going to be like a Hammer film when you’re in your thirties. When you were 15, maybe you did, irrationally. And you thought you’d be young forever and people would live forever (not only Robles, but also great-grandma).

They say that Robles haunts the theatre where they still perform La Dama de Negro. It’s comforting to imagine such a thing, right? That people remain. But the only immortality that truly exists is that of the celluloid. On the small screen Robles haunts the Mexican countryside eternally, caught “in that strange bridge, between the end of life and the beginning of death.”