This is the third in a series of blog posts before the release of Certain Dark Things. I’ll be discussing Mexican films, the barrios of Mexico City, and the folklore which inspired the novel. 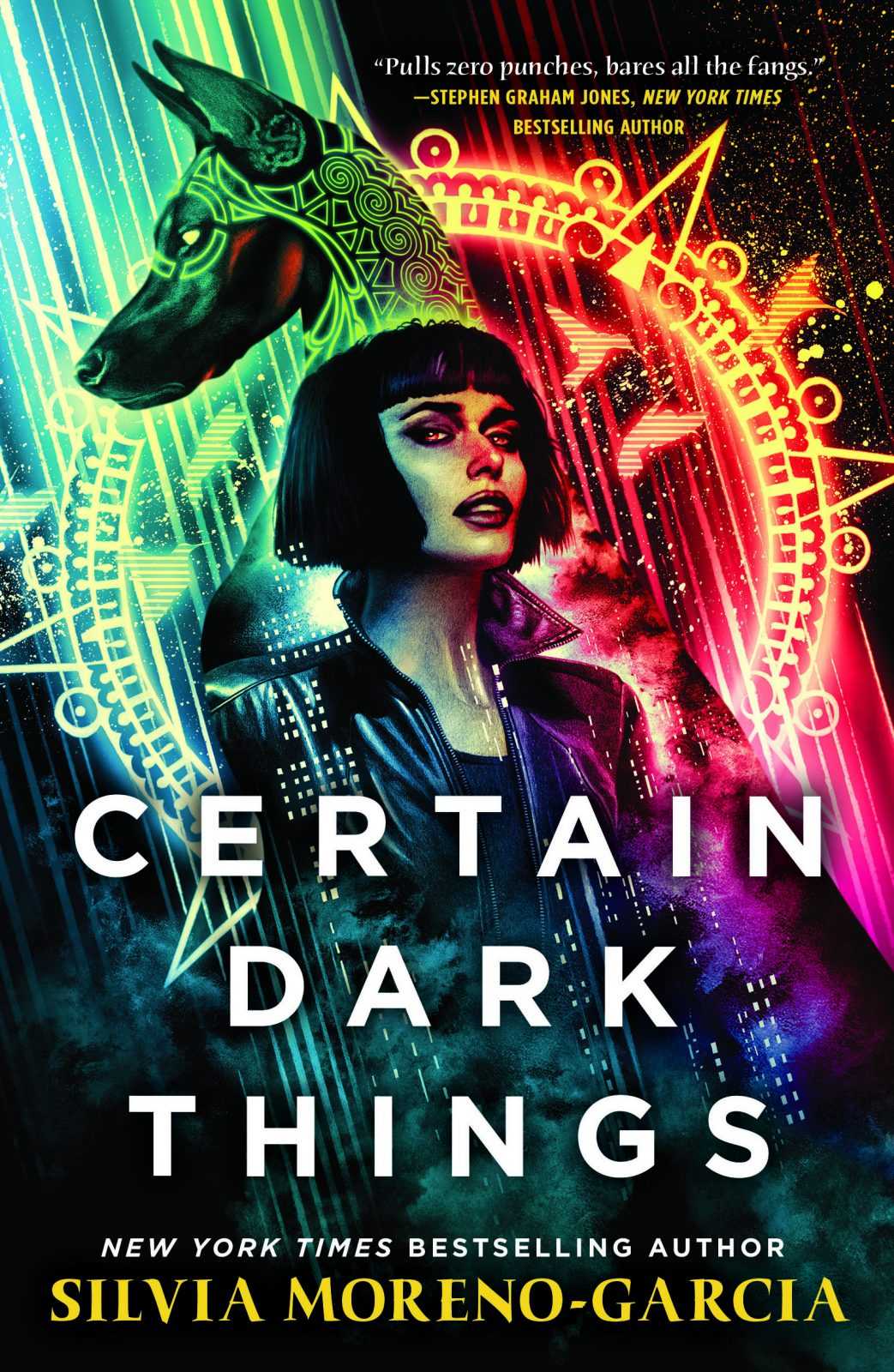 From the New York Times bestselling author of Mexican Gothic comes a pulse-pounding neo-noir that reimagines vampire lore. Certain Dark Things is back in print 2021.

Naming something establishes boundaries. When you say “bird,” most of us picture an animal that looks like a canary, not an ostrich. When you say dragons, we imagine the one Saint George battled. Adding a modifier, such as Chinese dragon, only partially solves the problem, since it implicitly asks the reader to add the Chinese mythological beast to a pool which is populated with creatures that look and behave differently.

Mythology is not convergent evolution, but in a market place where our dominant pop culture is Anglo, mythology modifiers such as Chinese dragon become one of the effective ways to communicate what a book is about.

What then of my “Mexican” vampires? Three things must be understood:

Atl, the protagonist of the novel, is tlahuelpocmimi (singular tlahuihpochtli). A tlahuihpochtli is a creature from central Mexico which belongs to the rich tradition of witches in Latin America and the Caribbean. My great-grandmother spoke of witches menacing the countryside, casting spells on men and performing mayhem. The tlahuihpochtli is a type of witch which is able to transform into an animal (often a turkey). It drinks the blood of small children during the night. It can glow at nights (my great-grandmother spoke of balls of fire in the trees, which cackled). A tlahuihpochtli is born with this condition, which manifests when they become teenagers. Evil is therefore a genetic gift or ailment.

There are many and contradictory ways to deal with such creatures, some simple and others elaborate. You can sew little silver medals with the faces of saints to the clothes the child wears, tie a handkerchief, or repel the vampire-witch with garlic or onions. But these are not the only solutions. There are probably two dozen ways to tackle them: folklore is complicated.

In moving this creature from a rural context into a modern urban city, I made changes to it. Atl is not a witch, and although she transforms into a bird-like creature, she does not hunt for babies (she does need “young” blood and ends up finding a teenage garbage picker who can provide this).

When working on my novel the basic question was “What if vampires were real, not myths?” So, Atl emerged as a sort of realistic vampire. She can’t cast spells, a little medal won’t scare her, and she descends from bloodsuckers who integrated well with Aztec society. She is contrasted throughout the book with other authentic vampires who have European origins and seem to be the basis for the vampire as found in pop culture, like Dracula. Society in Certain Dark Things is inundated with portrayals of Euro vampires, but the Mesoamerican ones are less visible. This is a slight parable of the way Mexican society is inundated with Anglo culture: walk by a Mexican bookstore, look at the SFF section and witness that it’s all books in translation.

Of course, by positioning itself in an urban context, by offering a glossary in the back and categorizing vampires, Certain Dark Things breaks some of the complications of folklore. Oral tradition allows for knots and contradictions the printed page and the modern fantasy novel avoids: my great-grandmother’s stories were not always the same in the telling, they did not all align neatly.

My novel borrows liberally from Mexican folklore, from my thoughts on Aztec culture, from Mexico City life, noir films and old horror movies. There are other visions of vampirism by Latin American writers: David Bowles wrote “Ancient Hunger, Silent Wings,” which also stars a tlahuihpochtli. Incidentally, Bowles has a collection coming out in a few months, Chupacabra Vengance, which contains this and other stories.

What am I saying? That I offer one vision of “Mexican” vampires, but one alone which should not be viewed as universal, nor the only one. Here below I reproduce “Stories with Happy Endings,” from my short story collection This Strange Way of Dying, which takes the vampire in Mexico in a different direction. Have fun.

… and I said “But what’s a vampire doing in Mexico City?”

The vampire was eating meatballs at a late-night restaurant and smoked cheap cigarettes that tinted the fingers and defiled the tongue.

He spoke with his mouth full, bits of meatball tumbling down to his plate. “Twenty million people.”

Behind him, through the window, I could see two street kids hanging by the cars and I was afraid of getting my tires slashed yet again. On the other side of the street I spotted the local beggar, palm outstretched and a baby upon his knee. In the ten years I had lived in the area, I had seen ten different babies. A new one every time the other started toddling. I had never given him a dime. Such stuff is for the tourists.

“Do you drink blood?”

“You live off the same thing,” he said pointing to the audio recorder which sat between us.

“That’s a very archaic view of journalists,” I said.

I thought of my beat, which is crime, and the eerie beauty of photographing the corpses the night has to give, a solitary candle burning by the body. Splatters of blood on the pavement and the click of the camera.

I miss the days of silver nitrate and dark rooms. Of enlargers and red lights. We’ve lost a slice of reality with the advent of digital cameras. Everything looks more distant, hazier, when it’s composed of jumbled pixels.

The waitress wandered by, refilling my cup of coffee. She looked tired. Like she pulled double-shifts and slept three hours in between jobs.

“Where do you work?”

“Security guard at a hosiery factory,” he said, pressing his cigarette against the ash tray. “Night shift. Today’s my day off.”

I looked at my pad and my doodles of bats and fangs stark upon the lined paper.

“In this fucking economy?” he asked.

“If I was an immortal vampire I’d try harder.”

I spooned two sugars into my cup, then added a third for good measure. Slow nights always mean an extra sugar and the chance to talk to whoever is sitting at the cafes and restaurants, to perhaps pull out another kind of story out of the hat. That’s how I’d found him. My usual curiosity. We started chatting, he said he was a vampire, I placed my recorder on the table. And yes, I’ve heard weirder stories. More bizarre confessions. Midnight is a time to talk to strangers, to unload your gut in between cigarettes.

“Any super powers? Turn into mist? Seduce people with your eyes?”

He just laughed. Not much to look at. Young guy. Bad haircut and a cheap shirt. Poor teeth. But his hands were long and thin and beautiful. Hands fit for Germán Robles, who played the most famous Mexican vampire back in ‘57; hands to beckon his acolytes of the night.

He also had a good voice. Smooth and low. That might have been just the cigarettes scratching the vocal folds, but it sounded elegant. It was the voice which had drawn me to his table. He had raised his hand and said ‘hey’ to the waitress and I’d turned my head to search for the source of the sound. I saw him. He looked at me with dark, deep eyes and smiled. His teeth were bad so the smile didn’t have quite the same effect as the voice, but I grabbed my camera and sat with him.

If only he hadn’t stained the fingers yellow with the cigarettes. If only he didn’t have the dark circles under his eyes. If only…then he might have played Karol de Lavud and appeared on my television set on Sundays, like when I was a kid.

“Not sure,” he said, pressing a finger against his chin and thinking. “Probably a hundred by now. I’ve lost track.”

“I also pawned the coffin.”

“I pawned the TV last summer.”

“Stories about detectives who solve crimes,” I said. “Stories with happy endings.”

“Nobody does anymore. That’s why journalism doesn’t pay.”

He slid his thin, long hands into a shirt pocket and pulled out his crumpled pack of cigarettes. He lit one. I almost wanted to grab his hand and slap it. Damn nicotine ruining his skin.

I stared at him and to tell the truth, I was a bit hypnotized by the whole tableaux. The hunched shoulders, the jacket and the aquiline face.

My phone rang and I grabbed the pad, scribbling quickly. I drank my coffee in one big gulp.

It felt good to be able to stretch my legs out of that booth and sling the camera over my shoulder. To palm my keys and make sure they were in the usual place. Murder awaited outside, and the cops and the group of onlookers, curious about what had happened.

“Are you going to do a story about me?” he asked.

“There’s not much of a story,” I replied.

He grabbed a napkin, wrote a number on it and handed it to me.

“If you ever want to learn more about vampires, call me.”

I left the money by my empty cup and stepped out.

Later, near dawn, I drove back home. The prostitutes lining the avenue were starting to disperse. In some streets you can buy a whore for 50 pesos. The same as a few beers or three tortas.

On a corner, I saw the vampire standing there with one hand in his pocket and the other holding his cigarette. He looked shy of one hundred under the harsh light of the streetlamp.

I thought of the city as a hooker with her neck pulsating, offering all its misery and pain for the taking.

Then I veered left, leaving the avenue behind, slipping into smaller, narrower streets of quiet apartment buildings.

I lost the number and I’ve never seen him back at the restaurant, but sometimes I wonder about vampires walking the streets late at night, going into convenience stores to buy packs of cheap cigarettes.

And the funny thing is, I never even asked for his name. And it’s okay, because I’m pretty sure it wasn’t Karol de Lavud and that, unlike Germán Robles, he didn’t own a carriage. And I like to think of him the other way, like in the movies that ran on Sundays. All tall and skinny and swathed with a cape, defying the vampire killers…