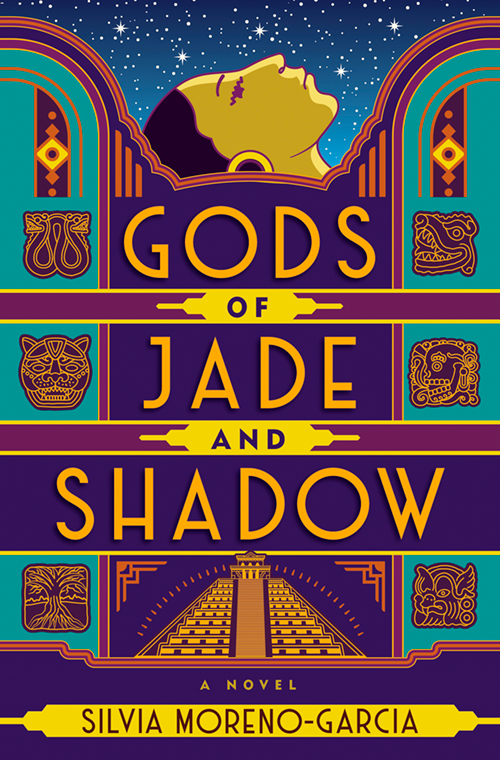 Gods of Jade and Shadow

The Mayan God of Death sends a young woman on a harrowing, life-changing journey in this dark fairy tale inspired by Mexican folklore.

About the Book
The Jazz Age is in full swing, but Casiopea Tun is too busy cleaning the floors of her wealthy grandfather’s house to listen to any fast tunes. Nevertheless, she dreams of a life far from her dusty, small town in southern Mexico. A life she can call her own. Yet this new life seems as distant as the stars, until the day she finds a curious wooden box in her grandfather’s room. She opens it–and accidentally frees the spirit of the Mayan God of Death, who requests her help in recovering his throne from his treacherous brother. Failure will mean Casiopea’s demise, but success could make her dreams come true. In the company of the strangely alluring god and armed with her wits, Casiopea begins an adventure that will take her on a cross-country odyssey, from the jungles of Yucatán to the bright lights of Mexico City–and deep into the darkness of the Mayan underworld.

Published in the US by Del Rey and by Quercus in the UK.

Endorsements
"Simultaneously heartbreaking and heart-mending, Gods of Jade and Shadow is a wondrous and magical tale about choosing our own path. I felt weepy and happy and hopeful when I finished - everything you want to feel at the end of a great story."
– Kevin Hearne, New York Times-bestselling author of the Iron Druid Chronicles
"An evocative and moving fairy-tale about a downtrodden girl and the Mayan God of Death and how they both find each other and their humanity together . . . Loved it. Highly recommend."
– Rebecca Roanhorse, author of Trail of Lightning
Silvia Moreno-Garcia's prose is like the best kind of fairytale - dark, enchanting, and makes you wish that you could live within its pages. Casiopea's journey belongs on every bookshelf
– Zoraida Córdova, award-winning author of Labyrinth Lost
"Set in a lushly rendered and gorgeous world, this is historical fantasy at its best: a fresh, feminist coming-of-age tale that lets the ancient and the new meld and clash in a tale you can't put down."
– S.A. Chakraborty, author of The City of Brass and The Kingdom of Copper
“A lush, bittersweet tale of courage, love and carving your own place in the world...Silvia Moreno-Garcia’s evocative prose will take you on an adventure for the mind and the heart.”
– Christina Henry, author of the bestselling Black Wings series
"A vibrant story of grit, giddiness, and glory with a protagonist whose personality burns bright as a star. Casiopea Tun will capture your heart and draw you into a jewel-toned world of myth-making and jazz music."
– Lara Elena Donnelly, author of the Amberlough Dossier
Resources

“Moreno-Garcia crafts a magical novel of duality, tradition, and change, set in the late 1920s as Mexico transitions from its post-Revolution period to the Jazz Age… Readers will gladly immerse themselves in Moreno-Garcia’s rich and complex tale of desperate hopes and complicated relationships.”  — Publishers Weekly, starred review.

“While the stakes are high for all of the characters, the book strikes a strong balance between the epic scope of the adventure at hand, and the rich internal lives of the characters.” — Tor.com

“Moreno-Garcia’s book is a dispatch from a universe where indigenous American legends have always been part of the lexicon of fantasy. That universe gets closer to being ours every day, and we are better for it.” — NPR

“This is Moreno-Garcia’s best book to date (and that is saying a lot), and one of my favorite books of the year, period.” – Kirkus

“Readers will be floored by Moreno-Garcia’s painstaking attention to detail, especially in her unforgettable descriptions of the emotionally charged interactions between realistic human characters and otherworldly gods, witches and demonic forces, as well as the fairy-tale and folktale aspects of the plot.” — BookPage

“Silvia Moreno-Garcia writes with verve and the Mayan mythology she draws on is fascinating.” — The Times

“Colourful, romantic and moving, Gods of Jade and Shadow is a sensational novel from beginning to end. Movie studios, if you’re on the hunt for the next great fantasy blockbuster to option, you need look no further.” — CultureFly

“Moreno-Garcia’s 2015 release Signal to Noise had readers hearing the music that sits at the heart of the main character as well as the story. But in this new novel, the author pivots on what sense she targets. She focuses not on our ears but our mind’s eye as she brings this world to life with color.” — Open Letters Review

“I’ve never wanted to sink into the pages of a book and reappear into the book’s setting so badly. Every line was crafted with the utmost care to create a vivid rendering of the Mexican Jazz Age and Mayan mythology.” — Smart Bitches Trashy Books

“This is a hopeful and bittersweet tale, with a whip-smart, practical protagonist, and will appeal to fans of S.A. Chakraborty, Naomi Novik, and Katherine Arden.” — The Skinny