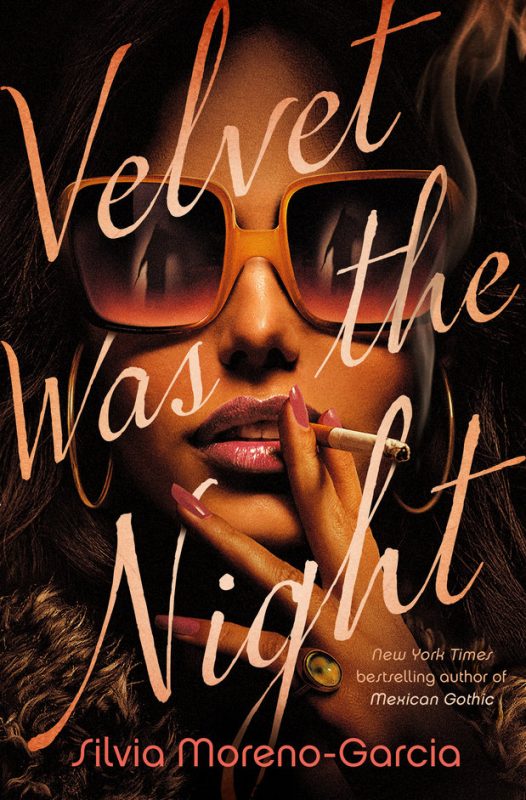 From the New York Times bestselling author of Mexican Gothic comes a “delicious, twisted treat for lovers of noir” about a daydreaming secretary, a lonesome enforcer, and the mystery of a missing woman they’re both desperate to find.

About the Book
1970s, Mexico City. Maite is a secretary who lives for one thing: the latest issue of Secret Romance. While student protests and political unrest consume the city, Maite escapes into stories of passion and danger. Her next-door neighbor, Leonora, a beautiful art student, seems to live a life of intrigue and romance that Maite envies. When Leonora disappears under suspicious circumstances, Maite finds herself searching for the missing woman—and journeying deeper into Leonora’s secret life of student radicals and dissidents. Meanwhile, someone else is also looking for Leonora at the behest of his boss, a shadowy figure who commands goon squads dedicated to squashing political activists. Elvis is an eccentric criminal who longs to escape his own life: He loathes violence and loves old movies and rock ’n’ roll. But as Elvis searches for the missing woman, he watches Maite from a distance—and comes to regard her as a kindred spirit who shares his love of music and the unspoken loneliness of his heart. Now as Maite and Elvis come closer to discovering the truth behind Leonora’s disappearance, they can no longer escape the danger that threatens to consume their lives, with hitmen, government agents, and Russian spies all aiming to protect Leonora’s secrets—at gunpoint. Velvet Was the Night is an edgy, simmering historical novel for lovers of smoky noirs and anti-heroes.
Endorsements
"VELVET WAS THE NIGHT is a delicious, twisted treat for lovers of noir. Silvia Moreno-Garcia is a masterful writer who pulls you into her dark world and never lets you go. From the suspenseful, slow-burn plot to the crisp, desperate characters, you will be obsessed."
– Simone St. James, New York Times-bestselling author of The Sun Down Motel
“Velvet Was the Night is a rollicking work of historical noir with a vivid sense of time and place and an unforgettable cast. Moreno-Garcia made me care deeply about her characters and their dangerous, riveting misadventures. This is a stylish, hard-boiled novel painted in shades of gray with a whole lot of heart.”
– Steph Cha, author of Your House Will Pay
"Velvet Was The Night cements Silvia Moreno-Garcia's incredible versatility as an amazing writer who moves between genres effortlessy. A lush , magnificent trip into a world of danger and discovery. Not to be missed!"
– S.A. Cosby , author of Blacktop Wasteland and Razorblade Tears
“Silvia Moreno-Garcia takes you into the gritty underworld noir of 1970’s Mexico City with a propulsive read where no one and nothing is as it seems.”
– Isabella Maldonado, bestselling author The Cipher

Download a book club kit with information on the time period and background behind the creation of Velvet was the Night.

“This seductive neo-noir thriller … draws on the real-life efforts of the Mexican government to suppress political dissent in the 1970s… Readers won’t be able to put it down.” – Publishers Weekly, starred review

“Moreno-Garcia keeps the suspense high and the action intense, all while sharing a bit of 1970s Mexican history in this perfectly pitched novel.” – Library Journal, starred review

“Moreno-Garcia … brings together a romance-fiction obsessed secretary and a lovelorn enforcer during the brutally suppressed student riots in 1970s Mexico City… Their stories of danger and passion run side by side in an enveloping narrative that is at once dark and bright.” – Booklist, starred review

“Immensely satisfying, refreshingly new and gloriously written…Moreno-Garcia’s storytelling, is how it imbues this well-worn genre with added strength, grace and even musicality” – The New York Times

“Through precise, accessible yet poetic prose, these charac­ters instantly come alive, and when they begin venturing into Mexico City’s darker corners, we are eager to follow them. The result is another triumph for one of genre fiction’s brightest voices” – BookPage

“Silvia Moreno-Garcia is the most impressive sort of writer, driven to experiment with genre approaches while maintaining a consistently high quality of work… It’s a delectable feast of a story.” – Toronto Star

“The delectable cocktail that is Velvet Was the Night contains a generous dash of bitters, but the finish is satisfyingly mellow. It goes down so smoothly that it left me marveling at what kind of sorceress Moreno-Garcia must be as she reworks genre after genre.” – Slate

“The perfect summer indulgence, this book leaves the reader keyed up, breathless, and eager for more of what Moreno-Garcia has to offer.” – Chicago Review of Books

“This is a noir with a heart of gold, and it’s a narrative in which the empathy we feel for its characters ultimately reveals an important truth: That Moreno-Garcia is not only a talented storyteller but also an incredibly versatile one.” – NPR

“Velvet Was the Night is a remarkably evocative noir novel set against the backdrop of one of the most turbulent political times in Mexico’s recent history.” – Criminal Element

“Both wonderfully atmospheric and an enlightening examination of the politics of the street and a world where endemic corruption reigns seen through the naive eyes of a romantic bystander…a fascinating slice of historical noir.” – Crime Time

“Romantic, eccentric and violent, this is a perfect example of neo-noir” – The Sunday Times Crime Club