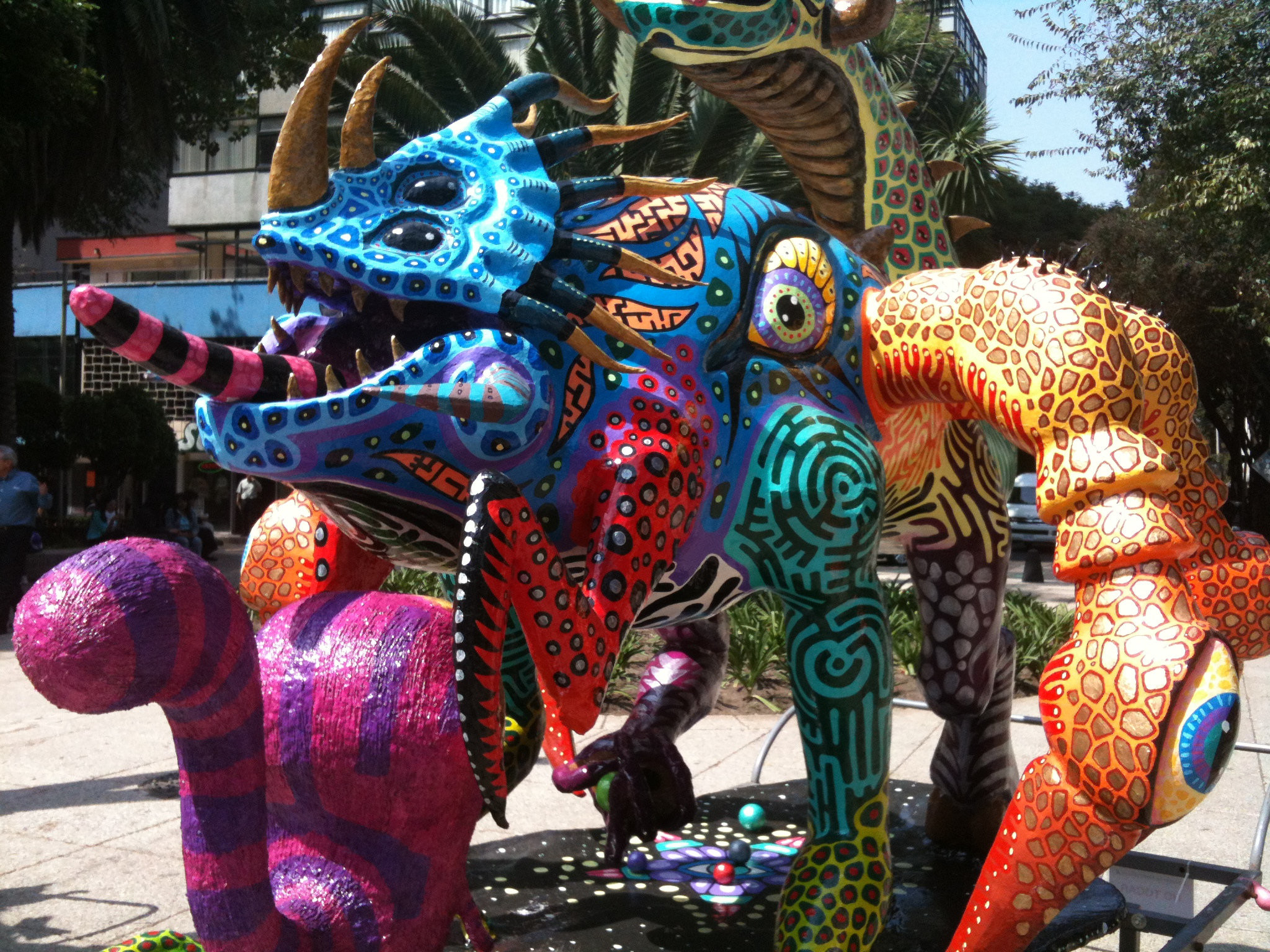 There is a creature in Mexico, a type of folkloric craft, called an alebrije. It refers to a mixture of things. The head of a bull, the body of a fish, the wings of a dove. Or a turkey that has grown goat horns. A horse which is half a lion. An alebrije is anything.

There is a phrase used in Mexico which I’ve always loved. It’s “gente bien.” It means “good people,” but it refers to people from the upper class. It also implies respectable people.

I was having lunch with Premee Mohamed one time, and we got to talking about cultural expectations from our respective families and how different they were from Anglo Canadian ones. The social strictures, the boundaries you navigate, the unspoken and spoken taboos. I told her I had always been attracted to Victorian novels because they seemed to reflect not the distant past, but my actual childhood. I recall how the Pope came to Mexico and even though I was in a private, non-Catholic school, they gave us the day off to go see him in a motorcar parade. I didn’t go. Everyone else did. And when I said I wasn’t going there was such unspoken and spoken pressure to have me attend.

Moments like these abounded. It wasn’t about who you really were, but about who you appeared to be. There was a constant game of appearance and reality. One of my relatives was a philander who had once literally pimped out women, but now we were supposed to never remember that, nor pay attention if we saw him with one of his mistresses. When my great-aunt had a child in the 70s out of wedlock, the younger members of my family were told it was “the Holy Spirit” who had gotten her pregnant.

I lived and grew up in Mexico in the 80s and 90s, and although we moved around quite a bit we lived in large cities. This was not some tiny rural reality. It was the urban reality where things were hyper-modern (I could  go to a multiplex and watch Bruce Willis shooting people, drink Pepsi and shop at Woolworths for imported Halloween decorations) and at the same time steeped in some sort of immemorial past of customs, genuflections and suppressed thoughts.

No wonder that I could sympathize with Newland from The Age of Innocence, or nod when Catherine must endure her oppressive father in Washington Square.

The Beautiful Ones speaks to my interest in such books, but it also reflects my interest in magic realism. Telekinesis makes an appearance in the novel. Fantasy demands worlds built like D&D manuals, showy “magic” and lots of action. It is the default for readers, the expectation. As someone who grew up reading Aura as much as Lord of the Rings, I reject that expectation. My love of magic realism is not only a love for a type of writing, it is a way of seeing the world, informed both by the stories my great-grandmother told me, and by the literature I consumed in Spanish.

Magic realism rejects boundaries and order. It accepts the unexpected. It does not attempt to systematize.

At a museum, I once saw a reconstruction of the failed Terra Nova Expedition. British explorers had taken horses with them to the Antarctic. This was not the only thing that doomed the expedition, although I find it a telling detail. They refused to adapt or consider their new environment carefully. Over and over again colonialist science around the world attempts to tame jungles and distant locales, to modify and to systematize the surroundings.

I believe magic realism reflects an opposite view of the fantastical. Rather than seeing chaos as something that must be measured, and eventually boxed, there is an embrace of it. It is probably a reaction to a political and social climate in which we were not allowed to speak and be ourselves for many reasons (in some places, because it could get you killed), but we could be anything, find anything, discuss anything, on the printed page. There was freedom there.

As for the final strand of the novel, there is romance. It is okay, nowadays, to read romance and science fiction and fantasy, with the caveat that it must be explicit that it is a kissing book. It is fine to want to read a tale of a seal-shifter who falls in love with a human as long as we’ve been told in big letters LOVERS. When people find romance entangled in their fiction without that big Harlequin marker, they tend to feel more uncomfortable. “I have nothing against romances,” is a common refrain, which of course means you have something against them. Romances are fine as long as they are not infecting proper SFF, or they yell loud and clear they are coming around the corner, lest they startle you. I’ve seen people more horrified about references to sex in Certain Dark Things than a vampire losing half his jaw.

The Beautiful Ones is a novel of manners, a love triangle, with two people who have telekinetic powers. It is neither the magic realism of Márquez, nor the modern urban fantasy which has often been the receptacle of romance. Like all my other books, it is a distillation of the things I love. It is a story of gente bien. It is an alebrije.