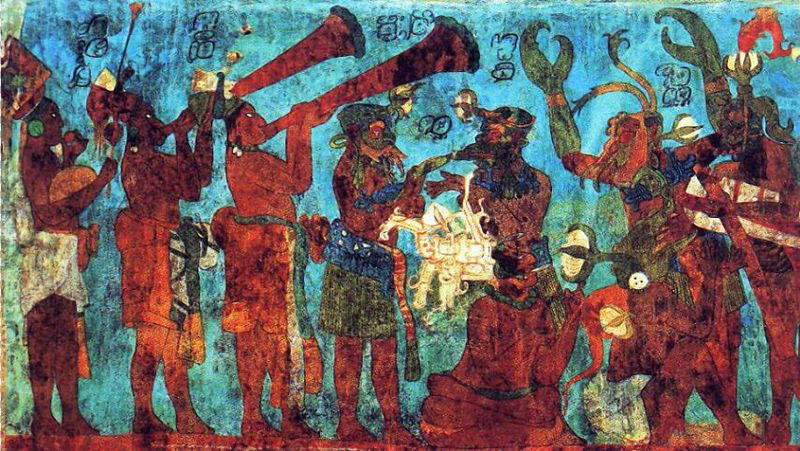 Mural at Bonampak. Musicians and dancers.

To the pre-Columbian K’iche’ people Xibalba, the Place of Fear, was an underground kingdom which was ruled by several underworld lords who were responsible for inflicting illnesses and deaths. In fact, the original title of my upcoming novel Gods of Jade and Shadow (out August 6, 2019) was Lords of Xibalba.

As James L. Fitzsimmons indicates in Death and the Classic Maya Kings, much of what we know about Xibalba comes from ceramic imagery – most written records of the Ancient Mayan were destroyed, though we do have a handful of codices and documents such as the Popol Vuh, a post-colonial text which deals with Xibalba in some detail.

Xibalba is understood to be underground, but some imagery shows it to be underwater, reached via a canoe. The waterholes known as cenotes can be interpreted as passages to this other realm.

Cenotes are “the murky sacred well used for sacrifices, believed to be the entryway to Xibalba” (Maya Script: A Civilization and Its Writing, María Longhena 148).

Xibalba is a “multilevel place with watery, noxious, dark attributes” (Fitzsimmons 50). Dogs or owls serve as messengers for the inhabitants of this underworld. Thanks to the Popol Vuh we know it has several large buildings or houses, a ball court, trees, numerous fantastic creatures, but most importantly that it appears to have a political hierarchy.

The Popol Vuh also states that there are 12 lords of Xibalba, who are mostly shown as fleshless skeletons in codices and ceramic vessels. There are some representations that show them with their skin and flesh intact (as in the image found on the vase depicted below). Two lords seem to rule over all the others: Hun-Kamé (One Death) and Vucub-Kamé (Seven Death).

The Popol Vuh indicates that mortals offered blood sacrifices to the lords of Xibalba until they were vanquished by the Hero Twins (we’ll talk about these two some other time) and afterwards only broken ceramics and croton sap were available to them.

“There will be no cleanly blotted blood for you… just brittle things broken to pieces” (Popol Vuh, The Definitive Edition if the Dawn of Life and the Glories of Gods and Kings by Dennis Tedlock, 138).

This is a big deal because blood sacrifices and worship are incredibly important in Mayan cosmology. The only reason humans were created was so they could offer sacrifices to the gods and worship them. The relationship between creator and creation is never one of equality, it is instead ruled by social and even cosmic responsibilities, which are embroidered into community ties. Yet there is a sense of cycles, of giving and taking, to these narratives. After all, the gods may require blood but they also give us the corn which nourishes us.

Gods of Jade and Shadow begins with a bone splinter and with blood, which seems appropriate.

In my novel the Lords of Xibalba are not nearly so frightful as the images in ceramic vessels. In fact, they are unnaturally beautiful and their kingdom, though at times ghastly, is also amazing. But then again, as The Poetic Popol Vuh  by Rob de Ridder states, Xibalba could also translate as the “Place of Astonishment.”

Tags: gods of jade and shadow