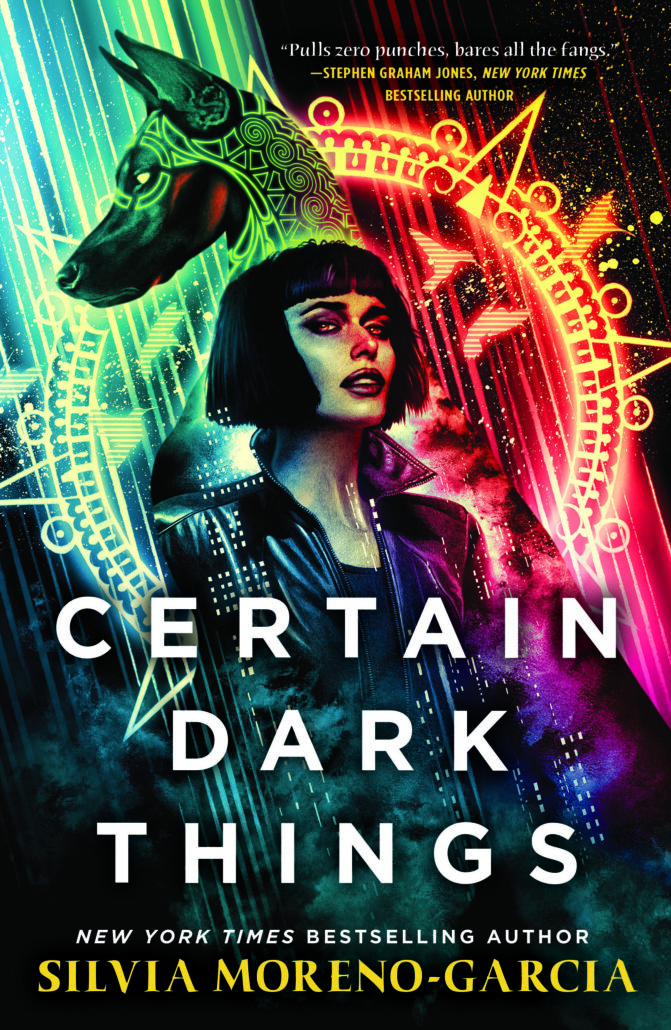 With its vibrant prose and stellar world building, Certain Dark Things is one of the best books I’ve read in years.

Silvia Moreno-Garcia carves out the heart of Mexico City, and then eats it, in this riveting noir-punk reinvention of vampire lore. Certain Dark Things is exquisitely vicious and brutally beautiful.

Not since Anne Rice’s seminal Interview with the Vampire has the vampire story been so radically reimagined. Silvia Moreno-Garcia reinvents it for the 21st century in this high-concept, explosive tale of narco-vampires in Mexico City, and just when you thought it was safe to step out of the coffin. Certain Dark Things is dark, inimitable, and so very, very cool. Unmissable.

Certain Dark Things is a delicious, elegant, gritty vampire noir. Moreno-Garcia has created a world that pulses with life and terror and honesty.

If The Girl with the Dragon Tattoo met (and devoured) Interview with the Vampire to the twined rhythms of Octavio Paz, Bram Stoker, and Ozomatli, you might come close to the layers and textures of Certain Dark Things. Set in a beautifully and heartbreakingly rendered Mexico caught up in Narco-Vampire wars, Silvia Moreno-Garcia’s novel lets us fall in love with many perspectives before she breaks our hearts and puts us back together again. I cannot wait for the movie.

Silvia Moreno-Garcia’s gritty novel is steeped in the history of Mexico City and vampire lore and yet manages to deftly re-invent the bloodsucker. The wonderfully complex Atl and her 21st Century Renfield, Domingo, are revelations. Certain Dark Things packs a wallop.

The Mexican setting is a huge part of the allure of this new novel from Moreno-Garcia (Signal to Noise), as are the fascinating varieties of vampires she sets forth.

I love to see compelling new takes on vampires, and Certain Dark Things succeeds beautifully; reading vampires through geography and mapping the consequences of their movements. Smart, tender and insightful, I enjoyed this tremendously.

One hopes that return visits to this urban fantasy world are in the offing.

There’s a cast of sympathetic and layered characters, and the writing is equally effortless even when describing gory action scenes and contemplative moments considering moral dilemmas. This is a new favorite.

With dark and delicious elegance, Moreno-Garcia delivers a satisfyingly bloody vampire story with a tantalizing twist.

—The Globe and Mail

Certain Dark Things is a gorgeously (dark) emotionally gripping thriller. Moreno-Garcia’s characters are vivid and compelling, as is her prose. As a novel, it’s fantastic: honest, wrenching, compassionate, and brutal.

Confirms that Moreno-Garcia is an author to watch.

With Certain Dark Things, Silvia Moreno-Garcia demonstrates that there is always more to be done with familiar figures such as the vampire, and that in the hands of a talented writer, the creatures can rise to new (un)life

Envisions a fascinating near future Mexico City with vampire drug lords vying for territory… and will appeal to those who enjoy rooting for unlikely heroes.

The novel has many mature themes, much violence, and strong language, but it all helps create a wonderful urban world filled with danger and suspense. Fans of visceral, grungy urban fantasy settings and supernatural elements will be engrossed. This excellent book is a must-have purchase for all libraries, especially where horror and urban fantasy fiction is hot.

Certain Dark Things is arguably the vampire novel for the 21 st century.

Nothing you’ve seen before will prepare you for the vampires of Silvia Moreno-Garcia’s brilliant new novel Certain Dark Things.

I pictured this book as the offspring of Baz Luhrmann’s Romeo + Juliet and Tarantino’s Pulp Fiction with a dash of telenovela and Silvia Moreno-Garcia’s own seasoning.

Are you one of those people who like to bitch about vampire lit being too pretty? Then shut your trap and pick this up immediately. You like your vampires bloody and violent? This is what you need. You enjoy clever, immersive world-building? Here you go. You dig noirish narco shoot-outs? You just hit bingo, motherfucker.

If you’re bored of pale, seductive heartbreakers boasting a mouthful of fangs and not much else, take a trip to Mexico City.