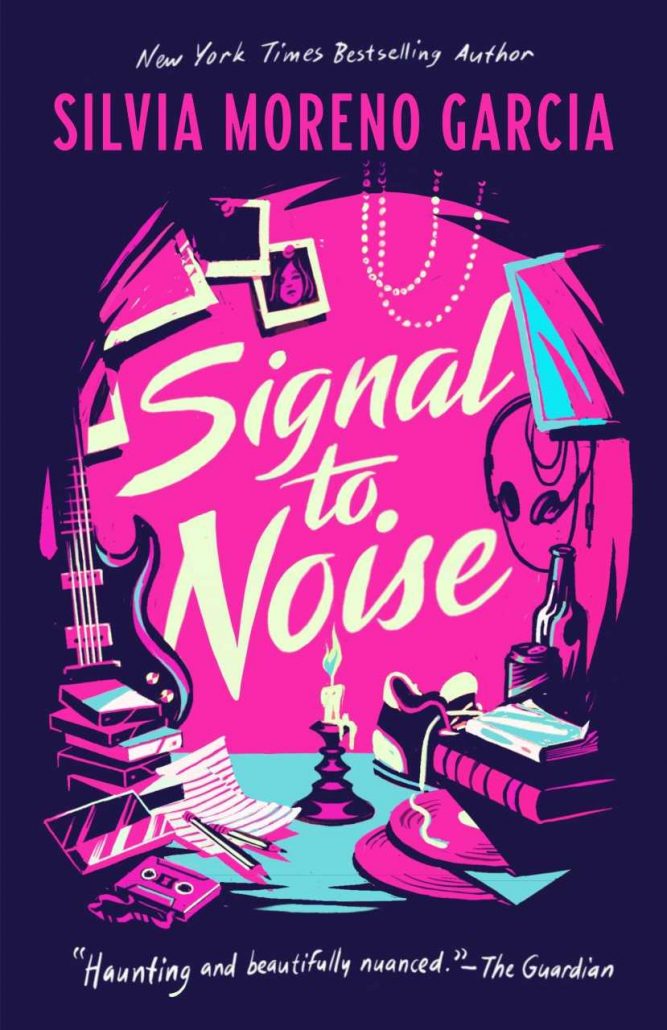 A literary fantasy about love, music and sorcery, set against the background of Mexico City, finalist for the British Fantasy, Locus, Sunburst and Aurora awards.
“Haunting and beautifully nuanced, Signal to Noise is a magical first novel.” – The Guardian

Mexico City, 1988: Long before iTunes or MP3s, you said “I love you” with a mixtape. Meche, awkward and fifteen, has two equally unhip friends — Sebastian and Daniela — and a whole lot of vinyl records to keep her company. When she discovers how to cast spells using music, the future looks brighter for the trio. With help from this newfound magic, the three friends will piece together their broken families, change their status as non-entities, and maybe even find love… Mexico City, 2009: Two decades after abandoning the metropolis, Meche returns for her estranged father’s funeral. It’s hard enough to cope with her family, but then she runs into Sebastian, and it revives memories from her childhood she thought she buried a long time ago. What really happened back then? What precipitated the bitter falling out with her father? And, is there any magic left?

Haunting and beautifully nuanced, Signal to Noise is a magical first novel.

Plenty of books use magic to talk about coming-of-age stories and the secrets that people bury… but few of them are as sad, or as evocative, as Silvia Moreno-Garcia’s new novel Signal to Noise

Vibrantly new… one of the most important fantasy debuts of the year.

Numerous ’80s musical references make this unusual story a welcome blast from the past.

In many ways, Signal to Noise is a coming-of-age tale, but it’s also the tale of what comes after — and what happens when forces beyond our control, magical or otherwise, are better left that way.

The book is this rich, elaborate symphony of awesome that defies simple definitions.

This charming literary fantasy will resonate for readers of all ages.

If you like well drawn characters, cool tunes and lashing and lashings of nostalgia, then you should check this out.

Refreshing, lively and unique, Moreno-Garcia’s debut novel is a triumph.

A great coming-of-age story that isn’t YA, but I think would definitely appeal to YA readers and adult readers alike.

It is a novel which doesn’t set out to shake the world but rather to present something that is personal and thoughtful; emotional but sometimes guarded. In this, it is much like the box of mixtapes I’ll always keep.

—Vector, the critical journal of the British Science Fiction Association.

Signal to Noise is an utterly gorgeous book, and will make you want to get out your old turntable and records and give them a spin or two (or three.) Don’t miss out on this one.

The book is also a love letter to the various formats people have listened to music with over the past thirty years.

Meche wants everyone to believe she doesn’t care about anyone and nothing, except, maybe, for her plant back in Oslo. But beneath that surly, bitter, rude exterior she has carefully crafted over the years, Meche is passionate. She feels. Her feelings run deep, they run hard, and they run swift. And that’s why I like her.

A captivating story about friendship, music and magic, set in Mexico City.

Magic and music meet in this must-read novel.

—Nerds of a Feather

It’s a sweet book that functions as a time capsule of sorts.

Readers can expect to feel every one of Meche’s mistakes and heartbreaks as if it were their own, so keep your box of tissues close.

Music pulsates through the scenes of this warm, compassionate literary fantasy novel