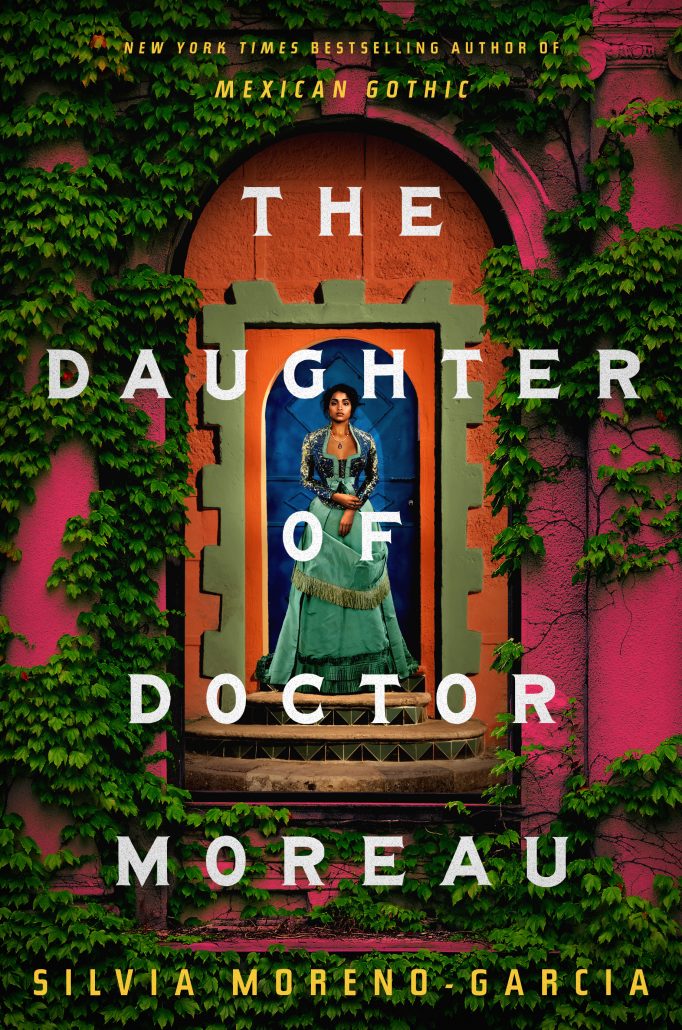 The Daughter of Doctor Moreau

From the New York Times bestselling author of Mexican Gothic and Velvet Was the Night comes a dreamy reimagining of The Island of Doctor Moreau set against the backdrop of nineteenth-century Mexico.

Carlota Moreau: a young woman, growing up in a distant and luxuriant estate, safe from the conflict and strife of the Yucatán peninsula. The only daughter of either a genius, or a madman.

Montgomery Laughton: a melancholic overseer with a tragic past and a propensity for alcohol. An outcast who assists Dr. Moreau with his scientific experiments, which are financed by the Lizaldes, owners of magnificent haciendas and plentiful coffers.

The hybrids: the fruits of the Doctor’s labor, destined to blindly obey their creator and remain in the shadows. A motley group of part human, part animal monstrosities.

All of them living in a perfectly balanced and static world, which is jolted by the abrupt arrival of Eduardo Lizalde, the charming and careless son of Doctor Moreau’s patron, who will unwittingly begin a dangerous chain reaction.

For Moreau keeps secrets, Carlota has questions, and in the sweltering heat of the jungle, passions may ignite.

The Daughter of Doctor Moreau is both a dazzling historical novel and a daring science fiction journey.

“This mesmerizing horror novel reimagines H.G. Wells’s “The Island of Doctor Moreau” in the Yucatán Peninsula. Moreno-Garcia immerses readers in the rich world of 19th-century Mexico, exploring colonialism and resistance in a compulsively readable story of a woman’s coming-of-age.”

“Part science fiction, part adventure, part social critique, this book – like many of the characters who inhabit it – is never just one thing.”

“This wholly new novel paints a vivid picture that is as alluring as it is unsettling, filled with action, romance, and monsters. However, it is Moreno-Garcia’s ability to mesh the unease of the scientifically created beasts with the real-life terrors of a life on the margins and the horror of colonialism that elevates this story. Readers will fall into this tale immediately, enchanted.”

“Moreno-Garcia’s worldbuilding chops are on display as she creates a distinct, vibrant backdrop to her audacious retelling.”

“This is historical science fiction at its best: a dreamy reimagining of a classic story with vivid descriptions of lush jungles and feminist themes. Some light romance threads through the heavier ethical questions concerning humanity.”

“With intelligence, energy, and unexpected tenderness, Silvia Moreno-Garcia takes on Wells’ classic tale of scientific hubris. Carlota, the mad Doctor Moreau’s only child, is a creation more original than anything her father’s cruel experiments could ever conjure. At once playful and deadly serious, The Daughter of Doctor Moreau is an irresistible and thoroughly satisfying novel.”

—Valerie Martin, author of Property and I Give It To You

The brilliant and unstoppable Silvia Moreno-Garcia continues to weave her magic in The Daughter of Dr. Moreau, a smart, sinister fable about social inequality and exploitation, isolation and abuse of power. In her usual fashion, Moreno-Garcia has given us an extraordinary heroine to root for in Carlota, a young woman who can’t know until she’s tested how much power is hers to claim. Both lacerating and deeply empathetic, this story satisfies the reader on every page.

—Paula McLain, New York Times-bestselling author of The Paris Wife and When the Stars Go Dark

“Beautiful, feral, and as sharp as a jaguar’s claws…I felt the anger and hope in this story down to my very bones. Truly, Silvia Moreno-Garcia is a virtuoso of the anti-imperialist gothic novel.”

—Annalee Newitz, author of Autonomous and Four Lost Cities: A Secret History of the Urban Age

“Lush, eerie, and compulsively readable. This story got under my skin and stayed there.”

“Silvia Moreno-Garcia goes from strength to strength. The Daughter of Dr. Moreau is my favorite of her novels so far — a gothic tour-de-force with characters who will keep you glued to the page, and a series of satisfying, surprising riffs on Wells’s original story.”

—Kelly Link, author of Get in Trouble

“Combines fantasy, adventure, and even romance; the result is hard to classify but definitely a lot of fun.”

“The imagination of Silvia Moreno-Garcia is a thing of wonder, restless and romantic, fearless in the face of genre, embracing the polarities of storytelling — the sleek and the bizarre, wild passions and deep hatreds — with cool equanimity.”

“With its evocative prose, post-colonial historical setting that drives the plot, and the introduction of vibrant, fascinating characters, both familiar and new, The Daughter of Doctor Moreau very much stands on its own.”

“From the brilliant and creative mind of the New York Times best-selling author of Mexican Gothic, this lush sci-fi novel reimagines H.G. Wells’s The Island of Doctor Moreau in 1870s Mexico. Silvia Moreno-Garcia gives us death, action, romance, and human-animal hybrids in a dreamy jungle landscape. With a narrative rooted in true historical events and heroine Carlota Moreau’s coming of age, The Daughter of Doctor Moreau takes an intersectional feminist and anti-colonial approach to the classic story.”

“Once again the author of Mexican Gothic demonstrates her genius for genre mashups, combining contemporary political awareness with the appeal of a creepy gothic romance.”

“Silvia Moreno-Garcia’s The Daughter of Doctor Moreau answers the question, “What if we took an H.G Well’s classic but made it feminist?” Intrigued? This genre-bending drama takes place during real-life events (The Caste War of Yucatan in the mid-1800s) while set against the fictional backdrop of The Island of Doctor Moreau… Throw in a sweltering jungle, some science-fiction weirdness, and you’ve got an unlikely winner of a novel. Is there anything Silvia Moreno-Garcia can’t do?”