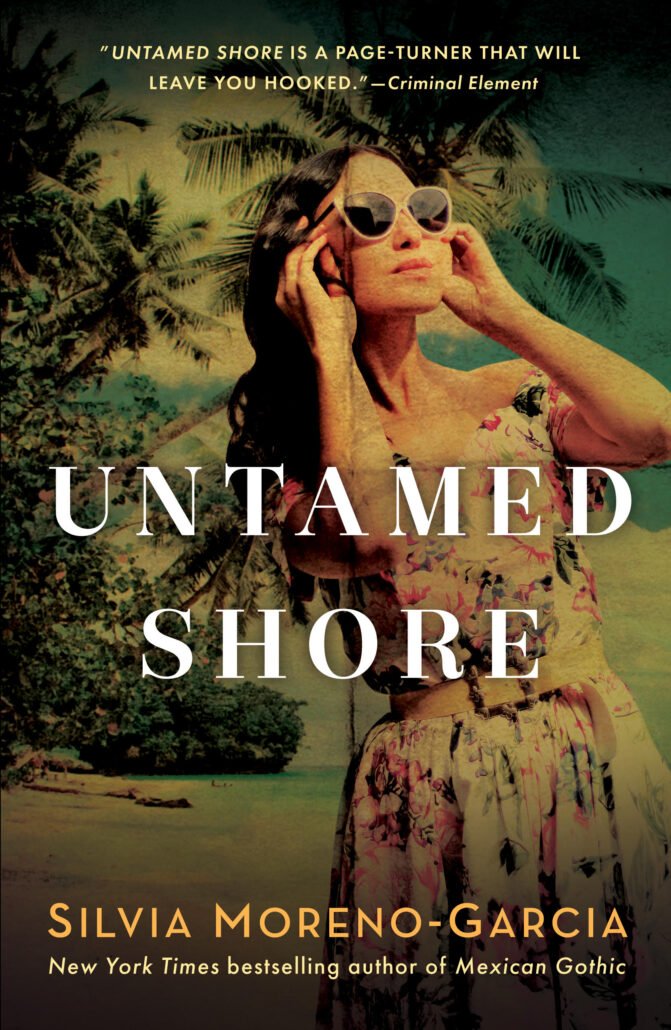 Baja California, 1979. Viridiana spends her days watching the dead sharks piled beside the seashore, as the fishermen pull their nets. There is nothing else to do, nothing else to watch, under the harsh sun. She’s bored. Terribly bored. Yet her head is filled with dreams of Hollywood films, of romance, of a future beyond the drab town where her only option is to marry and have children. Three wealthy American tourists arrive for the summer, and Viridiana is magnetized. She immediately becomes entwined in the glamorous foreigners’ lives. They offer excitement, and perhaps an escape from the promise of a humdrum future. When one of them dies, Viridiana lies to protect her friends. Soon enough, someone’s asking questions, and Viridiana has some of her own about the identity of her new acquaintances. Sharks may be dangerous, but there are worse predators nearby, ready to devour a naïve young woman who is quickly being tangled in a web of deceit. Silvia Moreno-Garcia is one of the most exciting voices in fiction, and with her first crime novel, UNTAMED SHORE, she crafts a blazing novel of suspense with an eerie seaside setting and a literary edge that proves her a master of the genre.

Rich in atmosphere and sinister in tone… a haunting lesson in the dangers of desire and the illusion of glamour and how dreams can be devoured by deceit.

Atmospheric, compelling and very suspenseful, Untamed Shore is a welcome addition to the genre.

Set in a small Baja town in the seedy 1970s, Silvia Moreno-Garcia’s latest takes us into a world soaked in sunshine and secrets, where everyone is working an angle and the looming sense of menace builds with nearly each page-turn.

Silvia Moreno-Garcia’s characters are unforgettable and no one and nothing is quite what they seem. I devoured this like one of Viridiana’s sharks.

This is a novel about greed, murder, and snowballing peccadilloes that moves forward with the power and grace of a shark. Don’t miss it.

A sense of inevitable dread builds from seemingly innocuous events in this masterful crime debut from Silvia Moreno-Garcia. The period detail is fantastic, the Mexican setting vibrant and fresh, and the noir is as murky as seawater after a shark feeding frenzy.

A plot driven by characters whose motives are as murky and treacherous as stormy gulf waters.

This thriller sets a quiet tone before building slowly and evenly, showing how a meek teenager trapped by circumstance grows into a strong woman who takes control of her future, though in the end it might change who she is.

Both a coming of age tale and a Patricia Highsmith-like tale of grifters and con artists set in Baja California, along a coastline full of rotting shark skeletons and oppressive patriarchal mores.” Book of the Month!

Weaving suspense, murder, romance, and the throes of young adulthood together, Untamed Shore is a page-turner that will leave you hooked…

Untamed Shore is a fever dream of a thriller, a coming-of-age tale set amidst disturbing and dangerous circumstances.

Silvia Moreno-Garcia’s Untamed Shore is an engrossing book set in 1979, in a seaside Baja California town known for its shark fishing… Untamed Shore takes us through Viridiana’s loss of innocence, then into her heightened sense of awareness, and finally into a plan for a better life.